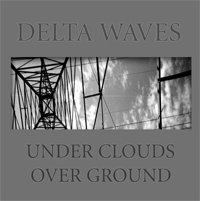 4 new delta wave tracks exclusive to Earth Monkey Productions. The magical sounds of Michigans finest brought to you by Cumbrias premiere label. A match made in heaven.

Bio
The Delta Waves started in late 95 as a series of recording projects created by Greg Naumann. Starting off as very experimental music recorded on minimal equipment (an early Fostex 4-track), Greg decided to expand the sound by collaborating and recording with musicians also of the then pinned 'Detroit Space Rock Scene'. The Delta Waves began playing live shows with a constant rotation of musicians like Eric Morrison (Fuxa), Mike Eberline (Unexplained Transmissions), and Rob Moon (Gravity Wax). In late 99 Anton Abramov also joined in and then became a member with Greg Naumann. After recording the material for their first full length c.d. "the Delta Waves dream in real time", Ryan Anderson (x-Fuxa) joined to complete the band.

Sound on "the Delta Waves dream in real time"
The Delta Waves music tends to come from a dream perspective with reverb drenched guitars and ambient soundscapes. The percussion delivers many different styles from techno to breakbeat to addictive acoustic beats. The Delta Waves like to make instrumental music as well as songs with vocals. Vocals are usually subtle and although they add a strong presence to the song they are almost hauntingly used as an instrument.
The Delta Waves explain their music as soundtracks to dreams or daydreams. The music is sometimes trancy and hypnotizing. They achieve a wide and dynamic sound through soft distortion and analog synth. Each song usually holds some form of contrast that slips into the listeners ears almost subconsciously. It is escapist music that is original and refreshing.
More good things to come
In the year 2005 Greg Naumann and Jason Taylor have finished up on a project called OUR DEARLY DEPARTED which leads them down a more experimental and soundscaped path. Equipped with a full release as well as a 3 song dvd demo, it will soon be released.

Reviewer: hmazuji - favorite - December 31, 2014
Subject: anti-delta waves
this noise woke me up. i got to keep looking for some real delta waves

Reviewer: urban psychodelia - favoritefavoritefavoritefavoritefavorite - March 25, 2006
Subject: wow more music from space rock capitol
The Detroit/Dearborn area has the greatest space rocker family tree. Lets see you have Windy and Carl, Fuxa, Gravity Wax, and here the Delta Waves! These are great tunes. They really take me where i wanna be. This is a more simplistic sound for Delta Waves but ear candy just the same.